The first book in the Can You Mend It? series  is called Part 1- Reunion as of April 2015. The subtitle was initially ‘An interrupted love story’ as many of you will still remember. Now that there are three books, which basically all belong to the ‘Interrupted love story’ I decided to change the subtitle of the first book. It just makes things clearer for those who are just starting with the series now.

So, everyone who’s already read part 1: Don’t be confused. I renamed it. Or actually, I just changed the subtitle… from ‘An interrupted love story’ to ‘Part 1 – Reunion’. 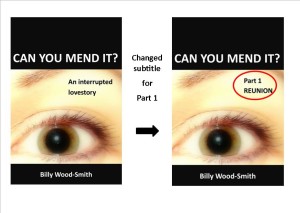 Can you mend it?