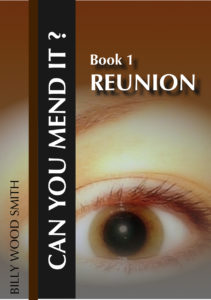 For everyone who just wants a quick and happy ending and who doesn’t care to read a second part.(This is not the ending I personally find realistic, though, and not what part 2 is going to be based on. I still like my orignal ending…)

It starts in Chapter “Back Off” when D walks out of the house after her exchange with Liz. See what you think.

D willed her feet out of the kitchen and down the corridor. She pulled the front door open. Staggered out.

She needed to get out! And breathe…

She could feel the cool soothing air flood her lungs.

Like in a haze she made it over to her car.

Joe caught up with her as she flung the driver’s door open.

“Danny, wait!” He grabbed her arm.

She yanked it away.

“I really didn’t know…” he started.

“That’s pretty obvious,” D retorted while turned away from him and trying to get into the car.

Joe grabbed hold of her arm again and held her back. This time his grip was tight enough so she couldn’t just pull herself free. Surprisingly, she didn’t even try to fight him, though. For a moment she just stood there – rigid and with her back to him. Then she slumped her shoulders and turned around to him.

“Just let me go!” she muttered with an exasperated shake of her head.

“Can’t do that,” Joe announced with some determination. “At least not like that!”

Briefly closing her eyes, D swallowed. That hand around her arm felt so nice and warm and comforting – and at the same time she just couldn’t stand it, because she knew that finding it nice and warm and comforting might only get her hurt in the long run. She couldn’t deal with him right now. Not after what had just happened in Sarah’s kitchen. She so wished he hadn’t followed her. She needed to go home and digest this – if that was even possible.

Joe loosened his grip on her arm a bit, relieved that she seemed to have given up her flight plan at least for the moment. He didn’t like the way she wasn’t looking at him, but at least she was still here.

“You were great,” he said, eyeing her cautiously.

She huffed out an incredulous breath and shot him a split-second glance up as if to check if he was actually serious.

“Yeah, thanks a lot!” she scoffed then, her eyes back on the ground. “Felt just great to have a little chat with her about that kind of stuff.” Her tone was dripping with sarcasm. “That just really made my day, Honey!” She put a purring emphasis on the last word, obviously trying to imitate Liz.

“Now let me go, Honey,” she said and pulled on her arm.

Exhaling audibly, Joe drew a little closer. His hand around her arm remained where it was. Just to be on the safe side…

Her eyes had flickered up to him as he had taken the step towards her. When she found herself caught in his gaze she quickly looked away – over towards the house. Having him stand so close made this so much harder.

“What I said in there doesn’t mean a thing, okay?” she muttered, her voice trembling now. “That was just between her and me. All just for show…” She cleared her throat. “I would have said pretty much anything as long as it hurt her, Honey.”

Joe ground his teeth. This was such a mess. Why in the world had he not just asked Jack to take Liz to the train station and make sure she got on some train – any train?

“Let me go, Joe,” D interrupted his thoughts and pulled her arm out of his grip. “I really need to digest this. And I need to think. About everything.”

“Right. Like that’s ever been a good idea,” Joe said drily and scratched his chin with the brace around his right hand.

“I just really need to –” she started.

“Let me come by later, okay?” He interrupted her and gently nudged her shoulder with his braced hand.

“Danny, come on,” Joe said and raised his other hand to her face. He was almost certain that she’d snort and pull away. But then she didn’t. As he ran the back of his thumb over her jaw, he could see her briefly close her eyes and suck in a shaky breath.

“Don’t do this!” she croaked as he lightly traced the shell of her ear with his index finger. “Don’t…” With a pained, accusing look she tilted her head away from his hand, desperately trying to hold it together.

“Couldn’t help it,” he said with an apologetic shrug and dropped his hands to his side.

“I can’t believe you were with that bitch for three years,” she said with a wary shake of her head. “Three years, Honey…”

“Yeah, three years,” he confirmed with some irritation. “And could you actually stop the Honey-crap now? I just hate that!”

She glanced up, looking surprised. “Yeah, that’s what I would have thought,” she said, her tone scathing now. “Because, as long as I can remember, you always used to hate those names…”

“I still do,” he said, his eyes firmly trained on her.

She shrugged jerkily. “Yeah, and still I could have sworn I heard her call you Honey more than just once. And I don’t even want to start imagining your names for her.”

“There weren’t any…” Joe said curtly.

“Yeah right,” she scoffed and dropped her gaze.

Watching her, Joe could see her swallow. So typical. Release all kinds of sarcastic and stubborn comments while struggling not to come apart. He was hard-pressed to touch her again. That seemed to be so much more effective than arguing with her.

“I can still kind of hear you,” she said warily and interrupted his thoughts about a more physical approach. “Oh, I’m not into the Honey-Baby-Sweety names…” she was doing a bad imitation of him now, her voice trembling. “And I don’t do the L-word. Because – well – I’m just not that kind of guy…” She shook her head. “I bet Liz helped you over your phobia with the L-word too!”

“No, she didn’t,” Joe said sharply, struggling to stay calm. “The L-word’s still as terrifying as always.”

Giving him a split-second look as if to check his expression, she scratched her left eyebrow. Then, staring at the pavement beside them, she drew in an audible breath. “Why on earth did you have to get involved with her?” she asked, “I mean – I don’t blame you for getting tired of me. Guess that just happens when it’s not right. But that you left with her!?! That’s just…” She broke off as her voice suddenly failed her. “Grrr… Couldn’t you have found someone halfway sane?”

His gaze drifting off to the roof of her car, Joe chewed on his lower lip. “Yeah, well, I don’t know…” he said slowly. He was not a big fan of relationship talk in general, and he didn’t think he was very good at it either. Having to do this out on the street without any prior preparation was less than ideal. But the way it looked, this might be his only chance to straighten things out. He could either take that chance or leave it – but if he let her drive off now, that might be it. Her thinking things over surely wouldn’t lead her to the realization that he was particularly good for her. And even if it did lead her there, she would probably never admit it.

Running his hand over the ledge above the car door, he cleared his throat. “I don’t think it had much to do with you and me not being good together,” he finally said. “And I wasn’t tired of you either.”

For a moment there was total silence.

“Well, what else?” D asked then. She sounded baffled.

“I don’t know,” Joe said uncomfortably, his eyes slowly trailing over to her face. “Maybe the problem was that you and me were too good together…”

Her eyebrows snapped together. “Huh?”

Joe shrugged apologetically. “Maybe it was me – my getting cold feet because it was way better than anything ever before.” He paused for a moment and weighed his words. “And my being scared to death because this might just be it and it might last forever..”

D was staring at him, looking stunned. “Well, you managed to keep that from happening,” she said quietly and looked away as her eyes welled up.

“Yeah, because I was a total idiot,” Joe said softly.

“I told you after the grill party that I wish I’d done some things differently,” he said. “That’s one of the things – in case you were wondering. The main thing, actually… I wish I hadn’t screwed it up.”

He looked at her and saw her stare at the ground, blinking uncontrollably – trying to pull herself together.

He reached out. And gave her shoulder a gentle squeeze. “Hey…” he said with a lopsided smile.

It made her glance up, her eyes still brimming with tears. “Maybe it wouldn’t have worked out then anyway,” she croaked.

He cocked his head questioningly.

She cleared her throat. “Maybe we both needed the time,” she said shakily.

He let out a little chuckle. “Oh, the time to make some bad experiences?” he teased.

A shy smile appeared on her face, and she nodded. “Kind of…”

“Could be…” Joe said slowly, his eyes meshing with hers. “We could always give it another try.”

With that he was leaning closer and brought his left hand to her cheek. He saw her blink, but she held his gaze.

“And as for the L-word…” he said, leaning his forehead against hers and pulling her a little closer with his braced hand against her back . “Let me try something, okay?” He sucked in a quick breath.

He heard her swallow, but she didn’t say anything.

“Well, maybe you could first do something with those arms…” he nudged his arm against hers. “Limply hanging down again.”

“Okay, sorry…” With a little chuckle she put her arms around his shoulder. “Better?”

“What did you want to try?” she asked.

“Something I’ve never done before.” He drew in another breath. “Okay. Here it goes,” he announced. “I love you.”

For a moment there was total silence. And Joe concluded that this was obviously not what she had expected. She had pulled away a little and gave him a stunned look.

He shrugged. “Yeah, that’s me using the L-word…” He blew out some air as if he had just accomplished something exhausting. “Wow. And that’s really scary.” He gave her a crooked smile. “But I mean it. It’s not just some line I say everyday…”

“Wow…” She let out a weak little chuckle and scraped her teeth over her bottom lip.

“I love you…” he said again and traced her jaw with his fingertips.

“I love you too,” whispered, her eyes meeting his. “Unfortunately it seems like I just can’t get rid of that…”

He laughed and pushed his hand back under her ear, against the back of her neck and leaned in.

“And I don’t want you to get rid of it,” he whispered, nose to nose with her now.

“Okay,” she said as if she was still considering this.

And as his lips were already brushing over hers she muttered, “I’ll stop trying then.”

Can you mend it?